An invitation from hospitable Yukonites to stay in Whitehorse for the2011 “Canadians” (West Canadian, and Canadian, Orienteering Championships)was too good an excuse to stop off on the way to Scotland for the Scottish 6 Days,so mid-July saw John and Robyn Davies and myself flying up to latitude 60° 43'0" N for a week of orienteering on very different and challenging maps. They talkabout “classic Yukon negative topography”, consisting of large depressions andfiner contour detail. The depressions are remnants of glacial lakes and are often wetand thick with scrubby trees at the bottom, with clearer, but often sparse, coniferousboreal forest surrounding them. Glacial processes also produced sandy soils,which even form the “world’s smallest desert” at Carcross. So we enjoyed a goodvariety of courses in a very friendly atmosphere, collected some charming medalsin the form of black metal flat cut-out ravens on red ribbons and did a bit of “sight-seeing” in between. Some managed to fit in hiking the Chilkoot Trail in the footstepsof the 1898 gold rush “stampeders” heading to the Klondike; I took the easier andspectacular White Pass and Yukon Route Railway to visit Scagway, and also wentnorth to the edge of the icefields of the Kluane National Park.

Then it was time to continue the journey to Scotland for some family time and thevery much larger orienteering event which “the 6 days” has become. Around 3500participants means many cars even with judicious car-pooling, but the organisersmanage the complex logistics of getting everyone along single track roads in andout of events with aplomb, and the whole process runs like a well-oiled machine.Scrummy food vendors compete for custom at the events, all the British clubs havetheir large colourful tents pitched and banners flying, and with 20+ New Zealanderstaking part, we flew our flag to create a meeting point, and it all became verysociable. The scoring system is a straight points system, with the best 4 results ofthe 6 events being counted towards a final score. Four New Zealanders were inthe top 3 in their grades at the end (Bunny Rathbone, Trish Aspin, Graham Fortuneand Sarah Wright), and more made the top ten. The terrain was a mix of boggymoorland interspersed with oak and birch thickets, and rocky outcrops, boulders andstreams to confuse the navigationally challenged. Which at times most of us were!As ever, the Scottish 6 Days was an excellent event as I am sure the other 4 PAPOparticipants will agree – see photo below! 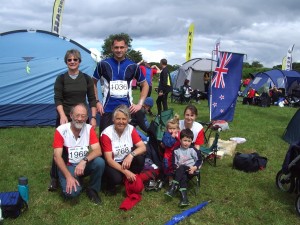