Congratulations to all our 2011 trophy winners! 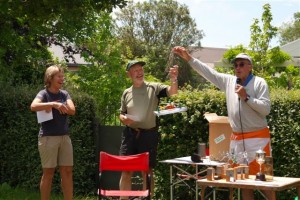 The Rangiora Christmas Caper and ensuing picnic gave us a great opportunity to acknowledge both the most consistent Orienteers of the year - the winners of the coveted stick men Orienteer of the Year trophies, AND various other VERY deserving members.

The Buchanan trophy for age and gender adjusted speed at the Canterbury Championships was awarded to Katie Cory-Wright.

The Sibley trophy for the Elite Women's Canterbury Champion 2011 went to Jenni Adams.

Our Volunteer of the Year  who earns themselves the wonderful "David Faulkner" trophy is our dear webmaster, William Richardson, for his sterling efforts getting this site up and running. Since William is currently gallivanting around Europe, his friend and Orienteering rival, Kieran Metherell, graciously agreed to receive the award on William's behalf. 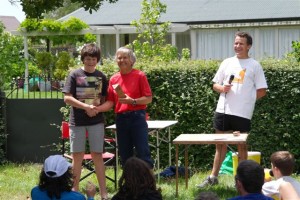 Last year's winner of the quirky but now earthquake damaged "Hermes" trophy (think Messenger of the Gods) chose to award it to Gordon and Jocelyn Thrower for their hard work ensuring that our printed newsletters get to the right people, and

Graeme Garden received a rather special one-off trophy for most dramatic 'DNF' of the year, a mounted miniature Westpac Trust helicopter.

Last but not least, Helen Egan won the fundraising raffle which included such glorious offerings as a free Rogaine with Pat Bodger, 4 hours of training with Chris Forne, and assorted wondrous and useful items. All proceeds (around $230) will go straight to the Westpac Trust Helicopter Team, so grateful are we all to have Graeme back upright and giving cheek. 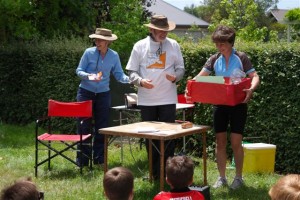